Please note: I will try and avoid major plot spoilers in this review, but some details of the story will inevitably be discussed. If you are going to read the book, just know that I loved it and you should go and read it now before reading the rest of this review.

I loved this book and it surprised me. It was chosen, by someone else, for my book club. From the title I was expecting some sort of sentimental tale of separation during the second world war and I honestly wasn’t really looking forward to reading it (I had no prior expectations as I hadn’t heard of the book before). It is not like that at all.

The book follows 2 main characters stories. A blind French girl, Marie-Laure, and a German orphan, Werner. They go from being 6 and 8  to 16 and 18 over the main action in the story, covering the build up to the second world war and the war years themselves.

Marie-Laure’s Father is the lock keeper at a the museum of natural history in Paris. She became blind at the age of six and her father makes her a scale model of their neighbourhood to help her navigate. The museum is a fascinating place for her to grow up in. Full of wonder and mystery, she spends her days moving from department to department learning about molluscs, bones, and a legend about a cursed diamond kept under heavy lock and key. After Nazi occupation becomes a certainty, they flee Paris.

Werner and his sister, Jutta, are orphans growing up in a grimy German coal-mining town, Zollverein. He’s a curious boy and becomes fascinated by radios. He has endless questions about the world and he wants to know how it all works. He learns all he can about maths and mechanics. The pair are fascinated by scientific radio broadcasts they discover, narrated by a mysterious French man. As a teenager, Werner’s skill at fixing radios brings him to the attention of a Nazi officer and he is sent to an elite Nazi training academy, leaving his sister and a much dreaded life of mining behind.

A flash of future events at the start of the book reveals Marie-Laure, 16, alone, high up in a house while the bombing of Saint-Malo happens around her. Werner is trapped in the basement of a bombed hotel, also in Saint-Malo. Their situations are similar. She is blind and cannot see the world around her to help her escape. He is trapped in a basement and unable to get a working radio signal to communicate with any potential rescuers. It sets up this peril right at the start of the novel, then over the course of the book we find out how they got into these situations, and crucially what is to become of them.

The light she cannot see is literally related to her blindness. For Werner it is the electromagnetic spectrum: radio, in particular that is the light you cannot see. There is a running theme in the book of the wonder and amazement of science. It doesn’t take over the story, but it pervades. Werner’s love of physics and maths was a great surprise and I don’t believe I’ve ever read a novel that has a character showing love for Pythagoras’ theorem before! There’s also Marie-Laure’s love of the natural world, sea molluscs in particular. I adored this theme in the book.

There are other great characters I haven’t mentioned. Marie-Laure’s ‘crazy’ uncle, Etienne, and his house keeper, Madame Manec. The Nazi jewel seeker, von Rumpel, ravaged by a growing tumour. A blatant representation of the evil of the Nazi regime if I ever read one.

I do have a few issues with the novel. For one, Werner is necessarily set up as an innocent, though he is also involved in the Nazi regime. I think it tries a little too hard to make us see him as somehow different to his colleagues. We are to forgive him for standing at the side lines while atrocities take place. He is one thing and they are supposedly another. This is somewhat resolved late on in the story. Generally though, this book does not deal with the horrors of the second world war in any deep and considered way. It stays near the surface of these issues and is very focussed purely on the experiences of our two main characters.

There is also a grim scene involving rape toward the end of the book. I see why it was included, but I think it’s wholly unnecessary.

That said, I enjoyed reading this book. It was so different from my initial expectation of a sentimental love story. Highly recommend it to anyone. At over 500 pages it never felt like it was that long and it is a much more complex story than I have represented here. 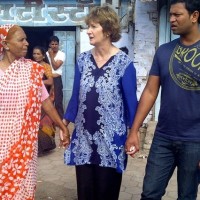